Malibu Media, LLC is the biggest filer of copyright lawsuits, possibly ever.  Since 2012, Malibu Media, LLC filed 6,000+ cases filed in federal district courts across the U.S. (and counting).  Their lawsuits sue for $150,000 in copyright infringement damages for the unlawful download of ONLY ONE MALIBU MEDIA MOVIE, but in their filing against the individual ISP account holder, they accused that subscriber of downloading tens, sometimes over 100 films. Malibu Media movies are no longer filmed (or, at a minimum, they are no longer filing copyrights for any new movies), but it appears as if 100% of their efforts is on tracking users who view those movies without authorization over the internet.

Malibu Media, LLC has been accused of not properly publishing their movies before suing defendants, and more often than not, internet users have reported that they were sued for downloading Malibu Media movies which were not yet posted on Malibu Media LLC’s X-Art.com website.  Curiously, Malibu Media movies first appear as “leaked” onto the bittorrent networks.  Recently, it has become a question as to whether Malibu Media, LLC is running what is called a ‘honeypot’, similar to what John Steele of Prenda Law Inc. was caught doing.

NOTE: BEFORE READING THIS ARTICLE: If you have not already done so, and you are implicated as a John Doe in a Malibu Media, LLC lawsuit, read these first:

1) “Everything You Need To Know in One Page About Your Malibu Media, LLC (X-Art) Lawsuit [FAQ]”
2) “In-Depth Malibu Media.  Their Lawsuits, Their Strategies, and Their Settlements”

FOR IMMEDIATE CONTACT AN ATTORNEY: To set up a free consultation to speak to an attorney about your Malibu Media, LLC lawsuit, click here.  Lastly, please feel free to e-mail me at info [at] cashmanlawfirm.com, or call 713-364-3476 to speak to me now about your case (I do prefer you read the articles first), or to get your questions answered.

Malibu Media, LLC does not immediately file the lawsuit once infringement is detected.  Rather, using technology akin to wiretapping, they will watch the IP address and network of their suspected infringer, and they will sit in the background like a virus and will log each and every movement, web page visited, and every movie watched (legally, illegally).

NOTE: Both I and Professor Sag have gone in depth about the lack of evidence Malibu Media, LLC has in their cases.  Like the other ‘common troll’ copyright trolls and those affiliated with Guardaley and their German shell company counterparts, the type of ‘evidence’ Malibu Media, LLC appears to log and produce is ‘snapshot’ evidence.  Snapshot evidence is proof that on a certain date and time, a computer having an IP addressed assigned to a defendant’s internet account was ‘in the room’ (in a bittorrent swarm).  However, this is not evidence that actual copyright infringement happened, or that they actually logged anything other than a snapshot.  Similarly, this “other evidence” they have when they track you 1) is likely inadmissible because it is illegal, and 2) if it is not wiretapping and it was obtained with legal means, it is likely prejudicial character evidence.  And even if it is not, 3) it is still likely hearsay.

Once Malibu Media’s German investigators have enough so-called ‘evidence’ on an alleged infringer, they will file a copyright infringement for one lawsuit, and as an attachment, they will list “other Malibu Media movies” they claimed were also downloaded, some logged months or even over a year before the lawsuit was filed.

I used the term ‘wiretapping’, which is illegal.  However, wiretapping is not the subject of this article.  The point to acknowledge is that Malibu is somehow tracking the activities of its selected targets, and once it has amassed enough incriminating data on that defendant, they file a lawsuit.

How do I know that Malibu is tracking their users?

The fact that Malibu Media, LLC is actually tracking the activities of their targeted users over a long period of time was not immediately clear to me.

In 2013, Malibu Media was listing “other downloaded movies and copyrighted titles” in their lawsuit filings.  Back in 2013, Malibu Media, LLC spent quite a bit of time trying to establish that their defendants were ‘serial’ infringers, and thus the judge should rule that any innocuous downloads should be considered ‘willful infringement’.  (‘Willful infringement’ carries statutory damages of $150,000, whereas ‘non-willful infringement’ can allow for minimum statutory damages of only $750).  Malibu’s goal at the time was to prove that since the defendant was a ‘serial infringer,’ meaning, since he downloaded all of these other titles, he must have downloaded their adult videos as well, as claimed in the lawsuit complaint.

The courts obviously did not like Malibu’s practice of including “other non-Malibu titles downloaded,” and they ruled that this evidence was prejudicial character evidence.  Since then, Malibu Media, LLC stopped including this extraneous data (although, this has not stopped other copyright attorneys from doing the same thing out of the court).

Thinking back, however, the question the attorney defending the case should have asked (it wasn’t my client’s case) was not only whether the so-called evidence of other downloaded movies is prejudicial character evidence, but whether Malibu Media, LLC broke federal and state wiretapping laws to acquire that information.

Just yesterday, I wrote that Malibu Media, LLC was on a three-month hiatus, and that based on their pattern of filing lawsuits, I did not expect new lawsuits to be filed until the summer.  However, for users watching and viewing Malibu Media movies, it occurred to me that they have already likely tagged you and are actively tracking your internet activities.  They will likely continue to do so until they file suit in their next round of lawsuits.

What can we do about it if Malibu is already tracking me?

Remember, Malibu Media only files lawsuits against defendants who have a history of viewing their copyrighted movies.  So if you were tagged, the best way to minimize your chances of being sued is to stop viewing Malibu Media movies.

However, as soon as you see the X-Art.com logo featured at the top of this page in Malibu Media movies’ intro clips, it is likely too late.  They have likely already tracked that, so unplugging the power from the wall won’t change the fact that they just monitored you downloading their adult film.  It is better to be aware of the sheer number of Malibu Media movies already copyrighted, and to be aware of which adult movie titles belong to Malibu Media, LLC.  Better yet, it is a good idea not to get tracked at all, but that is outside the scope of this article (and take those precautions at your own risk), especially since we do not yet understand how they are tracking your activities.

How can I look up the Malibu Media movies which have been copyrighted?

The Copyright.Gov page allows you to do a search.  You would search for “Malibu Media” in the “Name”.

When you do the search, you will see the following page snippet; click on “Malibu Media, LLC” (as of writing this article, they have 731 titles copyrighted). 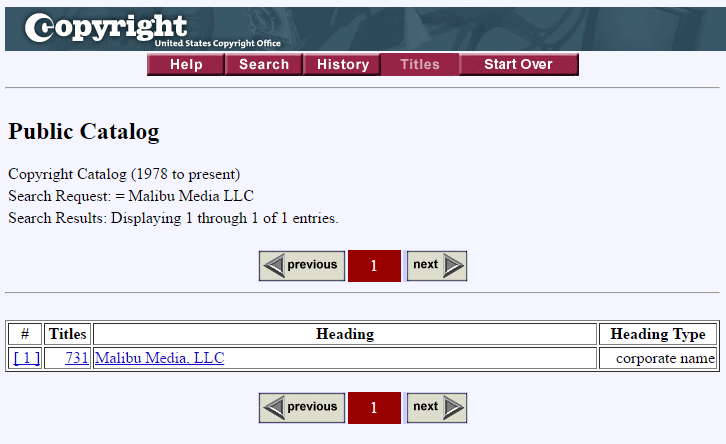 How Many Malibu Media movies were filed each year?

This is not exactly relevant or useful (yet), but it is still interesting to note.

I also want to note that at the peak of their lawsuits — 2013-2014, they filed a total of 366 full length adult videos.  That’s a lot of video taping (and a lot of something else) — almost one full length adult film churned out every other day.

Lastly, it is notable that in 2016 and 2017, the number of new Malibu Media movies dropped to 46 in 2016, and ZERO in 2017.  At this point, Malibu Media, LLC and X-Art.com are no longer in the adult film business.  Their activities appear to now comprise 100% copyright trolling.

Can I see the list of Malibu Media, LLC movie titles?

And last, but not least, the list of Malibu Media movies currently copyrighted (in ABC order).

In closing (if you even got this far in the article), be aware that Malibu Media, LLC is no longer in the adult movie business, but rather, in the copyright enforcement business. Their entire operation is based on monetizing the value of the 700+ copyrights they have filed with the copyright office. Similarly, I must assume that 100% of their operations budget is going into the costs of enforcement, namely, computer servers, and the costs of monitoring each of the hundreds of defendants I expect they are currently tracking and will be suing in the coming months.

If you are interested in Malibu Media, LLC content, get a membership to their site (but do not expect to see new content). Do not view any of their content via bittorrent networks, as this is how they are compiling their lists of who to sue. In fact, if you see anything X-Art related, it’s probably a safe bet just to click away from the site and shut the window. Even streaming can get you sued these days.

And if you are sued, our Cashman Law Firm, PLLC can be of assistance to you. Malibu Media, LLC cases all suffer from the same inherent faults, and that gives our clients a number of options on how to ignore, fight, or settle claims against our clients.

What else can you tell me about the Malibu Media cases?

[2017 UPDATE] The best way to learn about Malibu Media, LLC is to read what happened to them as it happened.  The list of stories below (in the order I listed them) tell the Malibu Media story in a way that you will understand them.

—
FOR MORE INFORMATION ABOUT MALIBU MEDIA, LLC:Again, if you have been implicated as a John Doe defendant in a Malibu Media, LLC lawsuit, there are TWO (2) main articles you should read immediately:

1) “Everything You Need To Know in One Page About Your Malibu Media, LLC (X-Art) Lawsuit [FAQ],” and then
2) “In-Depth Malibu Media.  Their Lawsuits, Their Strategies, and Their Settlements.”

FOR IMMEDIATE CONTACT WITH AN ATTORNEY: To set up a free consultation to speak to an attorney about your Malibu Media, LLC lawsuit, click here.  Lastly, please feel free to e-mail me at info[at] cashmanlawfirm.com, or call 713-364-3476 to speak to me now about your case (I do prefer you read the articles first), or to get your questions answered.

2 thoughts on “Malibu Media movies, and why it is important to know this list.”