I have been fighting with myself trying to determine whether to write this article for a problem with Warner Brothers’ $20 settlement demand letters that they are sending out to accused downloaders of their content. Yet I suspect that this is just the beginning of something larger — I fear that the MPAA might be jumping on board the “DMCA settlement letter” scheme or even worse, starting to sue defendants again en masse for copyright infringement.

Under a company named “Rightscorp, Inc.,” (Website: http://www.DigitalRightsCorp.com) Christopher Sabec is sending out “DMCA Letters” almost copying CEG-TEK’s letters accusing the internet user of copyright infringement and offering to settle the claims for a mere $20.

[UPDATE: Updated information on Rightscorp, including my current opinions about their DMCA settlement demand letters can be found in the “All I Know About Rightscorp in One Page” article, which I will be keeping current.]

RightsCorp is representing, however, mega corporations such as Warner Brothers Entertainment Inc. (“Warner Bros.”) on their ABC Family teen shows such as “Pretty Little Liars” (file: “Pretty.Little.Liars.S03E05.HDTV.x264-LOL.mp4”) among other TV shows geared at teenagers who are quite savvy on the internet. The expectation is that not all of the episodes are available on their http://abcfamily.go.com website, and so naturally kids will migrate to the internet and Bittorrent to download the earlier episodes taken down from their websites.

What is bothering me, however, is that the release on their https://secure.digitalrightscorp.com/settle website (pasted below) releases the accused defendant from their claim of copyright infringement for a mere $20, but it has the defendant ADMITTING GUILT to the infringement. Thus, in legal terms, an accused internet user who pays the $20 may be released from liability for THAT instance of infringement, but the next time they catch that user downloading, they can not only sue for the full $150,000 (or ask for TENS OF THOUSANDS OF DOLLARS as a settlement), but in court, they would use the prior settlement as EVIDENCE OF GUILT that the accused defendant habitually downloads copyrighted videos and TV shows.

To be clear: EVERY settlement agreement for copyright infringement should have language stating that the accused defendant is not admitting guilt, or else the act of settling a copyright infringement claim can be construed as an “admission” of guilt in a court. Specifically, the language (e.g., taken from CEG-TEK’s settlements) would say something like “this Liability Release represents a compromise and that nothing herein is to be construed as an admission of liability on the part of RELEASEE.” This language appears to be purposefully ABSENT from the RightsCorp Settlement Agreements.

For this reason, it is difficult for me to suggest hiring a third party / attorney and paying one of us to anonymously settle a $20 matter, BUT it is my opinion that the RightsCorp settlements are simply dangerous to your legal rights.  Yet the flip side is that Warner Bros. is a MPAA member, and they have unlimited pockets to sue a defendant (they have in the past, and they could again in the future), and that not settling could later result in a second claim against you for a lot more money (it is not unlike them to ask for $20,000 as a settlement for one title).

My Thoughts: I am not sure I would want the MPAA (or any of its members) to have my client’s contact information with what is essentially an “I did it, I’m sorry, I won’t do it again, here’s $20” settlement agreement.  And, if I settled a claim, I would probably do so anonymously and respectfully.

I would not want to instigate a “David vs. Goliath” fight with Warner Brothers or the MPAA on behalf of my client (who would likely end up being the HARD-WORKING PARENTS of the kid who did the download).  In a court battle, we would have the uneven legal situation [yet again] where the plaintiff copyright troll has unlimited financial and legal resources and the defendant has limited means to even hire an attorney to represent them.

The MPAA has been lying dormant these past three years while the porn companies and their copyright trolls fight out the issues in the various federal courts across the U.S. My suspicion is that they are getting ready to dip their toes back into the water and start suing internet users again. I am suspicious that perhaps this $20 scheme is just their way to start getting names and contact information to gear up to sue “repeat offenders” who have already settled one of their claims. And for $20, it appears to me that this will be an easy way to lure defendants into giving over their contact information to be solicited later for something else.

Here is a sample copy of their release (noting that the “no admission of guilt” language is missing):

IMPORTANT: Please retain this document for your records. It releases you from liability for the below mentioned infringement and serves as official notice of settlement.

In consideration of the settlement payment made and the representations and agreements made in this Release & Settlement, Warner Bros. Entertainment Inc. (“WB”) for itself, for its past, present and future directors, shareholders, members, managers, officers, employees, agents, attorneys, representatives, partners, trustees, beneficiaries, family members, heirs, subsidiaries and affiliates, and for its and their predecessors, successors and assigns (collectively the “Releasor”);

From any and all manner of actions, suits, debts, sums of money, interest owed, charges, damages, judgments, executions, obligations, costs, expenses, fees (including attorneys’ fees and court costs), claims, demands, causes of action and liabilities, that arise under the United States Copyright Act, in each case whether known or unknown, absolute or contingent, matured or unmatured, presently existing or hereafter discovered, at law, in equity or otherwise, that the Releasor may now have or that might subsequently accrue against the Releasee arising out of or connected with the specific Infringement of copyrighted material(s) referenced above;

Provided however, that this release shall not, and shall not be deemed to, constitute a release with respect to any other past, present or future infringements by Releasee other than the specific Infringement of copyrighted material(s) referenced above.

Robert Steele agrees not to infringe any of WB’s filmed entertainment (including but not limited to films, videos, video games, animation and television programs), whether now in existence or later created, that is owned or controlled by WB. In furtherance of this agreement, Robert Steele agrees to immediately and permanently cease the unauthorized copying and/or distribution (including, but not limited to, downloading, uploading, filesharing, file “swapping,” or other similar activities) of WB filmed entertainment, including, but not limited to, those items listed in this correspondence.

If you have any questions about this release, please contact [email protected]

6/21 UPDATE: I have been seeing lawsuits filed by Warner Bros Home Entertainment Inc. v. “named defendant” et al. I have provided a screenshot below from the http://www.rfcexpress.com website. After a quick investigation, these lawsuits are NOT RELATED to what I am referring to in this article.  Yet, it is still concerning that Warner Bros. is taking such an enthusiastic interest in the federal court system for copyright infringement lawsuits. 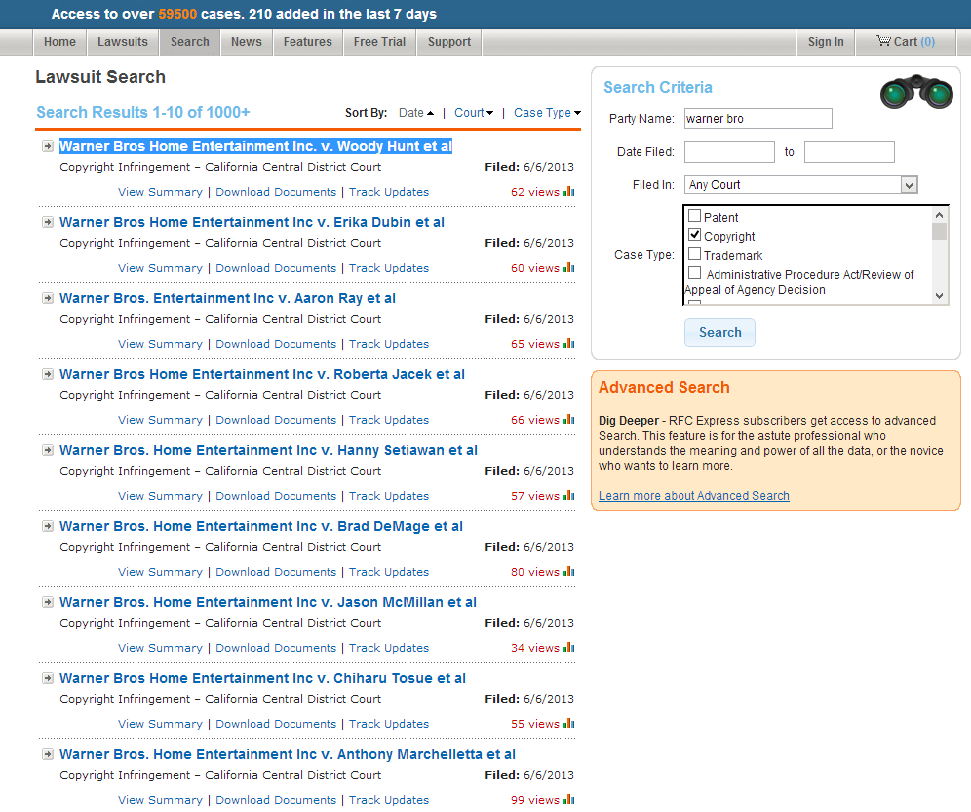 27 thoughts on “RIAA/MPAA giant waking up and luring defendants into settlements?”