As a follow-up to the “Sunshine State: No longer a “Happy” place for copyright trolls” article I wrote on Tuesday, I was surprised to see that one of Dunlap Weaver, PLLC’s cases — this one having 3,932 John Doe Defendants — survived UNSCATHED. It blows my mind that this case is still alive!

Nu Image, Inc. v. Does 1-3,932 (Case No. 2:11-cv-00545) in the Middle District of Florida was filed back in September, 2011, and our Cashman Law Firm, PLLC has been tracking the case since its inception. Jeffrey Weaver of Dunlap Grubb & Weaver, PLLC (“DGW”) filed this lawsuit after his lead attorney, Nicholas Kurtz left the firm to do who-knows-what.  Having a copyright troll / mass bittorrent extortion outfit with no lead attorney to fight the cases must have been a disaster for the firm, and so DGW partner Jeffrey Weaver took the case.

Now, over two years and 293 docket entries later (yes, watching this docket will max out your PACER payment every time you load the page), the case hangs in limbo.  On December 26th, 2012, Judge Sheri Polster Chappell denied Nu Image, Inc. more time to name and serve defendants.  We would think this would be the death nail for the case, but for some reason, the judge has not yet dismissed it.  (I can only assume this means that she is giving Weaver one last chance to prove that he is not a copyright troll, meaning that he actually has an interest in protecting his client Nu Image’s interests and going after the accused defendants.) I have seen this firm name defendants before (even out of spite or vengeance when a certain attorney insulted them publicly [no, that wasn’t me that time]), so while I wouldn’t be surprised if they pull out an “Ace” and name hundreds of defendants, I really don’t think this will happen for the following reason:

DUNLAP WEAVER, PLLC is lacking local counsel across the country.  While many of us attorneys have been building our local counsel networks across the U.S. (both on the defense side and on the plaintiff copyright trolls’ side), this law firm appears to have been stagnant, perhaps suffering from a bad economy and a failed copyright trolling business model.  They were the first, the biggest, and the oldest copyright trolls, but when they fired a number of paralegals who [unbeknownst to the partners at Dunlap Grubb & Weaver, PLLC] were doing most of the “scare” work and settlement negotiations for them, and when their lead attorney jumped ship, I expect they received an unexpected dip in their settlement rates (more like a fall-off-a-cliff wake-up call).

As a result of lacking a significant local counsel network of attorneys, they cannot sue the 3,000+ defendants in their home states.  And, of the 3,000+ defendants, very few of them live in Florida.  Thus, they are no doubt experiencing some legal logistical issues.  This doesn’t mean that they cannot go after defendants.  It simply means that they haven’t gotten their act together to do so, and that they may never get organized in time to do so.

As a funny side note, I wanted to point out that “John Steele” is the U.S. District Judge for this case.  Not the same John Steele that we know from Prenda Law Inc., but another John Steele.

In sum, I am watching this case carefully because I would like to see it go bust like the others.  I am dumbfounded why this case wasn’t killed with the others.

I would think that when someone creates and copyrights a film, the purpose of creating that film is to attract viewers to purchase tickets to view that film either in the theaters, or by selling DVDs of that film.

It boggles my mind that more and more, I am seeing B-rated film companies release garbage films that nobody would watch, and instead of promoting their film to attract viewers, somehow those films are “leaked” onto the internet, only to see the production companies then sue internet users for $150K for each internet user who downloaded their films.

Earlier this week, my kids were watching Mr. Rogers’ Neighborhood on PBS, where Fred Rogers was quite a bit older than I remember him being when I was younger. To show them the “Mr. Rogers” I remembered, I searched around and found an older version where his hair was black and he was quite a bit younger.   The video was obviously copyrighted, but it was also uploaded and online for all to see.  Was I wrong for playing this video for my kids?  Or, should I have contacted the Rogers’ Foundation and acquired a license to purchase a copy of this video [noting that there is likely nowhere to purchase this black-and-white video]?

My point is that the copyright laws as they apply to individuals needs to be changed.  Production companies should make quality videos THAT SELL TICKETS (and DVDs) rather than trying to cash in on the end user that happened to view that video online without permission.  As I mention in my policy letter to lawmakers, if a production company really wanted to police their own copyrights, they are already given a legal remedy, and that remedy is to file a DMCA takedown notice with the website owner — and the unlicensed (“pirated”) video is quickly and effectively taken down by the website owner, or else the website owner can be found liable for copyright infringement himself.

If the Rogers Foundation wanted to stop me and my kids from viewing a 1968 version of Mr. Rogers, then they could have easily sent a one-page takedown request to YouTube.com where that and many other similar videos are hosted.  There is no reason for them to come after me, my kids, or any of the other thousand viewers, unless stopping “piracy” for copyright trolls is not the their real intent.

Back to the lawsuits and the new copyright trolls I am discussing in this article.  One new copyright troll is Canal Street Films, Inc. (link) who is suing 117 John Doe Defendants in two lawsuits in Washington for the download of their “Scary or Die (2012)” horror film.  The attorney suing is David Allen Lowe of Lowe Gram Jones, PLLC (link). The lawsuits are: 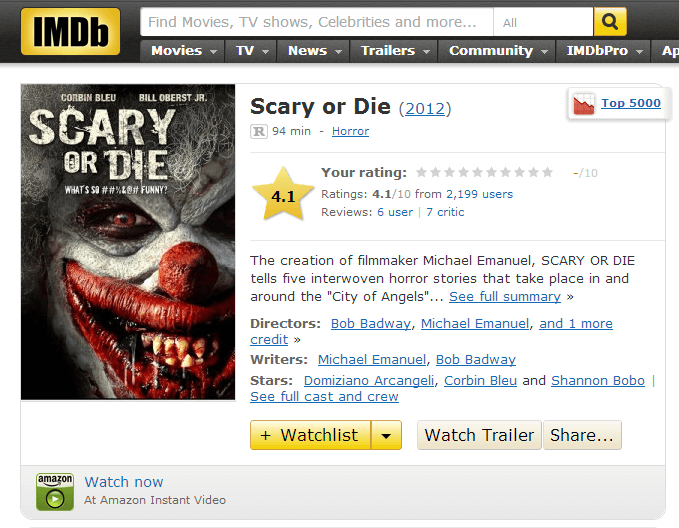 Also suing in the Washington Western District Court are new copyright trolls Kintop Pictures, Inc. and their attorney, Richard J. Symmes of the Frontier Law Group.  It appears that each lawsuit was for the download of the title, “Tucker & Dale v. Evil (2010)” film (link).  The strange thing about these six cases is that they were all filed at the same time in December 2012, and with ZERO explanation, just a few days ago, they were ALL DISMISSED.  I wonder if this copyright troll or their attorney grew a conscience, or whether they just needed to get their copyright paperwork in order before they reared their ugly head and started suing defendants again.  Nevertheless, because they sued internet users directly using the “bittorrent swarm joinder theory,” I am listing their cases in this site.

Then in the Missouri Eastern District Court, Paul Lesko is still at it filing copyright infringement lawsuits on behalf of his new clients, PHE, Inc. and Purzel Video GMBH, both for the download of pornography titles.  The lawsuits are:

Lastly, in my own neck of the woods, I saw two cases filed against 400+ defendants by new copyright troll Studio West Productions, Inc. The lawsuit is for the download of the film, “In the Name of the King: Two Worlds (2011)” (link), and even though the copyright troll attorney is John W. Raggio of the Raggio Law Firm, P.C. in Dallas (5 hours away from the court), after some research, it occurred to me that Raggio is merely local counsel to Dunlap Grubb & Weaver, PLLC (now, Dunlap Weaver, PLLC).  I am frankly surprised that they are still suing defendants, as they are one of the older copyright trolls out there, but they lost most of their litigation power when their attorney Nicholas Kurtz and a number of their paralegals left the firm after an internal shake-up early last year.

All I have to say about these two cases is that they are in my back yard, so I will be happy to be there at the hearings and report things as they evolve.

As for all the other cases out there, I am still watching out for them, and if I see anything of interest, I will be happy to share what I find.  Obviously if anyone has any updates or questions about these cases, you know where to find me.